A Unique Spectacle: Andean Bears in the Wild

In the four years that I’ve lived in Ecuador, I have spent significant time in the habitat of the Andean, or Spectacled, Bear, be it in the cloud forests or the paramo. On occasion I have noted an unusual footprint in a muddy trail that could have been left by a bear, but the promise of actually seeing one has become almost mythical. Sure, there are a few bears in zoos and conservation projects, but who has ever witnessed one in the wild? With the already small population threatened by hunting and habitat destruction, the remaining bears must have retreated to the impenetrable thickets of the Andean slopes, far from any trail or road. 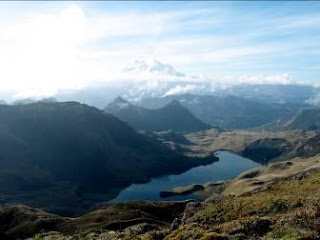 In the last few years I have become an avid birdwatcher, on weekends making excursions from Quito to sites on the western and eastern slopes. Early one Saturday morning I went birding at a well-known site called the Antenas, located at 4000 meters above sea level just inside the Cayambe-Coca Reserve, near the road to Papallacta. It had rained intensely the night before, but this morning was sunny and clear, allowing for stunning views of the nearby glaciered peaks of Antisana, Cotopaxi, and Cayambe.

Despite the snow and ice still on the ground, the birds were already active, and I had a good look at a Red-Rumped Bush-Tyrant while still in my car. There was also a herd of about six White-Tailed Deer grazing near one of the many lagunas in the area; as I drove by, a buck with an impressive pair of antlers gazed at me intently while several does skittered away, their upraised white tails flashing mirror-like in the light. 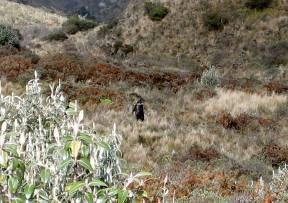 Once out of the car and attired in wet-weather and birding gear, I was quickly drawn away from a trail by several Carrunculated Caracaras flying low just above a rocky ridge. As so often happens when I’m birding, my attention was then attracted to a Variable Hawk, a Blue-Mantled Thornbill, and a White-Chinned Thistletail in quick succession. After flushing several Andean Snipe on accident, I was already smiling at my good fortune.

Then, while I was following another White-Tailed Deer through the elfin forest in hopes of capturing a striking photograph, I noticed an unusual dark shape in the background. With the aid of my binoculars I was shocked to see a large Spectacled Bear standing on its hind legs and sniffing the air in my direction. I quickly threw myself down in some bushes and tried to maneuver downwind in hopes of more prolonged viewing. Heart racing due to excitement and altitude, I could hardly hold my binoculars still, but the bear soon reappeared in a clearing, this time accompanied by two cubs. 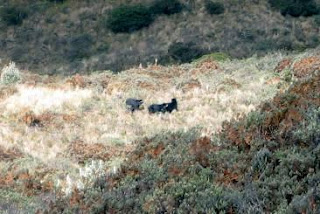 For the next hour, I carefully stalked the bears as they worked their way slowly up a ridge feeding from a variety of plants and occasionally glancing in my direction. They seemed aware but unthreatened by my presence, and I had ample time to photograph and video them in a range of poses. Particularly impressive was the facility with which they navigated the steep and rugged terrain, almost as if they poured over the slopes like water. Also touching was the different way the cubs interacted with the mother, one boldly striking off alone while the other still trying to suckle. Their facial patterns left no doubt as to why they’re referred to as being spectacled, and the visual effect was rather humorous as they lolled about in the grass. 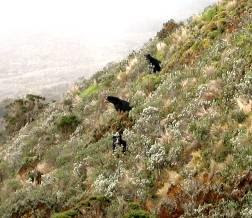 Maybe if there had only been one bear I would have followed it for even longer, almost like a hunter, but somehow watching a family of three bears behaving so intimately together came to feel strangely like voyeurism. I decided not to pursue them over the ridge and returned to watching the much less anthropomorphic birds, even though I knew I’d most likely never see a Spectacled Bear in the wild again.


To share and help make sense of my experience, I’ve been in touch with the Andean Bear Conservation Project, a unique and noble organization based in Ecuador committed to protecting the bear from extinction. Researching the bears’ behavior while tracking their movement using radio equipment, this grass-roots operation depends largely on donations and volunteers to continue its work. If you’re a traveler interested in visiting the habitat of the bears and contributing to their conservation, in addition to perhaps witnessing one in the wild, this is an excellent opportunity. Having already received the gift of seeing the bears in the wild myself, I’ll definitely be volunteering soon. 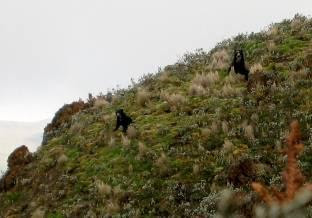 Posted by Andean Bear Project at 4:39 AM

As a biologist working with the Andean bear myself I completely identify with your post...

You made me remember the first and only time I have seen a bear in the wild (mum and cub in fact) in the cloud forest of the Venezuelan Andes.

Good Morning, my name is Daniel Ochoa. I am manager at Maquipucuna reserve and lodge. in the las 2 months already in the reserve we have seen more than 15 different individuals. You may know about this phenomenon. They are still around but we do not think for much longer. If you want to come to see them and take some pics for your project, please let me know.
daniel.ochoa.solis@gmail.com, lodge@maquipucuna.org